A long-lasting partnership requires strong management. This is exactly what you will find at ZYNK, where we combine a warm human touch with unrivalled mastery of software development.

Meet the Leaders of ZYNK Software 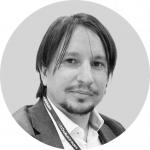 As ZYNK‘s CEO, co-founder, and co-owner, Gheorghe guided the software company on a path to excellence in custom software development. A versatile and experienced business executive, he has applied in the CEO role his strong technical background. Among others, Gheorghe masters technology management, large-scale system architecture, and Agile methodologies. Furthermore, he is an accomplished manager of offshore software development projects. A deep theoretical background complements his business acumen and rich experience as a manager. Proof of this is Gheorghe’s Ph.D. degree in multi-objective optimization, evolutionary algorithms. Gheorghe still gets involved in projects as a Business Analyst and Architect when necessary, and his managerial role permits. Naturally, his expertise and experience make a difference in such situations.

As a co-owner and developer, then team lead and project manager, Mihaela has been with ZYNK since the birth of the software company. In these positions, she acquired over 11 years of experience in Web and Mobile Development. Of them, five years were in a PM role that also covered typical Business Analyst responsibilities. Despite being an innate leader, she still loves and is involved in coding. After graduating in Automations and Computers, Mihaela made a difference in dozens of projects. Of these, some run in up to seven different countries, each of them with separate infrastructure. To help her in the PM role, Mihaela got the SCRUM Master Certification, which she put to good use.

All in all, she is an accomplished specialist that any software company would want in the project team.

Tell Us About Your Software Project

Send us a brief description of your needs. Shortly after, our experts will get back to you with suggested approaches for cooperation or times for a call.