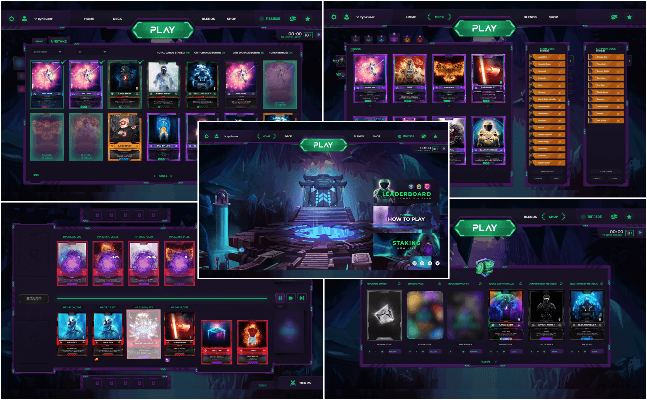 This Blockchain game is one of the most iconic and complex games ever listed on the WAX Blockchain. It has its crypto token published on the Alcor Exchange Market. With features like its own cryptocurrency, smart contract, and scheduled transactions, it offers a unique user experience. Besides, it allows authentication with multiple wallets, has an elegant user interface and animations, various levels, mana charges, and many more. Last, it attracts users with unique NFT collections.

Spurred by the rapid rise of the crypto market, our client was preparing the release of a unique NFT collection. Given the quality and popularity of the last collections released and the uniqueness of the concept they had in mind, our client had great expectations from this collection.

The functional specifications were quite daunting. Thus, after staking multiple NFTs, users had to create three types of decks: hero, support, and boost. They would gain mana charges over time. Once charged, they would enter the battlefield where their NFTs fight against NPC’s cards and win tokens or NFT chests. With the won tokens, they would buy NFT upgrades from the shop to craft more powerful cards. Besides, winning should allow players to compete on the monthly leaderboard and be eligible for even more rewards. Another important feature the client wanted was an automatic system to manage the leaderboard and receive statistics via email.

Our common objective was to create a beautiful play-to-earn game that would stand the test of time and build a vast community of followers.

ZYNK’s team worked alongside a group of great designers to turn the idea into reality and produced a highly successful game, which includes three layers.

The first is a web application built on a game engine named PhaserJS. This part ensures an interactive and pleasing experience for the users.

The second layer is the very core of blockchain: smart contracts. To be more precise, we had to implement two smart contracts, one for the game itself and the other for the custom cryptocurrency.

The last layer was more challenging to implement than expected because of the uniqueness of the approach. As WAX blockchain no longer supported scheduled transactions, we had to think well out of the box to handle the automation aspect of signing planned transactions, sending emails with statistics, and resetting the leaderboard period.

Solving this problem gave us a significant technical advantage over the other WAX applications. Other features that differentiate our solution from the rest include token and NFT chest rewards, a periodic leaderboard, and an in-game shop. Furthermore, players can enjoy NFT staking, multiple deck building, multiple NFT collection support, an automatic email statistics system, and in-game currency.

The game ensured a consistent and high increase in the NFT collection’s value, visibility, and trustworthiness. In addition, it led to improved user retention and trust and built and maintained a strong community around the project.